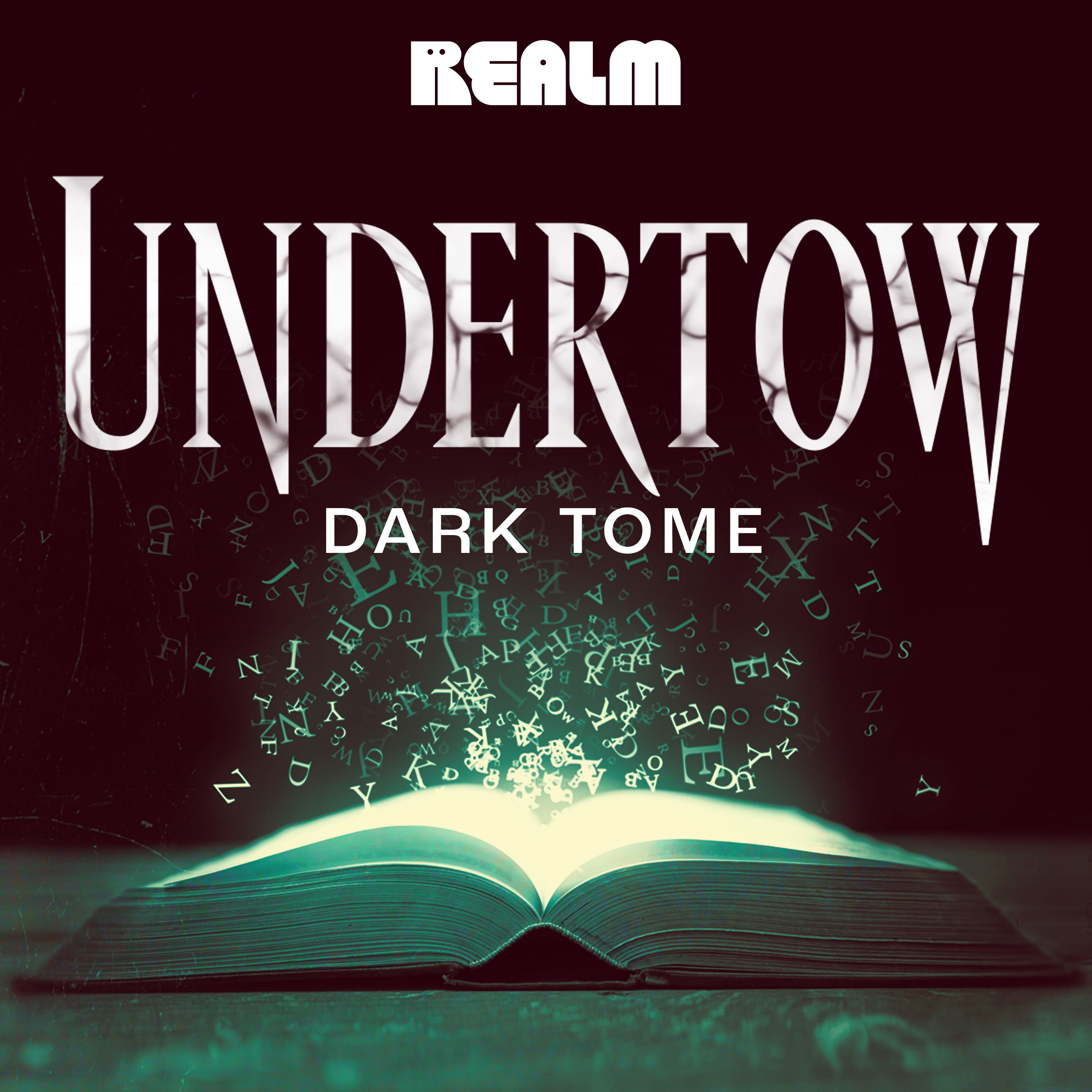 UNDERTOW is an ongoing supernatural horror series that reveals the dark, monstrous side within us all. Every week, host and creator Fred Greenhalgh will take you deeper into this warped version of Maine where nothing is as it seems. Here, still waters hide eerie rip-currents and the secrets we keep from each other… and ourselves. No one can escape the Undertow.
This month, travel to unexpected places with DARK TOME. What if there was a book that literally opened up doorways to other worlds? Where would it lead, and could you handle what you found on the other side?

Cassie, a teen that's having trouble fitting in at school, is about to find out. One day, after she wraps up community service at a local hospital, she stumbles out of the basement of a spooky bookshop and into a story set on a devil's staircase in a remote Italian village.

Heard Undertow: Dark Tome on Realm yet? Join me: https://realmfm.page.link/xNJHHwQYRFACoVDy6

Dark Tome E1 - The Curious History of the Dark Tome

We transition from the Blood Forest to the world of the Dark Tome via an apocryphal internet essay written in 1999 by a rare book specialist in Simpson Falls, Maine. We learn all about the Dark Tome's strange origins, its connection with lycanthropy, and its weird journey from Mesopotamia to rural Maine.

Dark Tome E2 - The Devil on the Staircase

"We meet teenager Cassie Pinkham, who grudgingly is reading books for the cantakerous bookkeeper, Mr. Gussy, as he recovers from surgery. Gussy sends Cassie back to his bookstore, warning Cassie that there is a particular book - The Dark Tome - that is not to be opened. Cassie, naturally, decides to open up the cover and see what it's all about. This flings Cassie into the world of acclaimed writer Joe Hill's chilling fable, ""The Devil on the Staircase,"" narrated by a man who walks crooked steps for a living, before discovering a door that leads him straight to hell."

Dark Tome E3 - The Bread We Eat in Dreams

"Cassie knows better but can't escape the temptation to return to Mr. Gussy's bookshop. She finds the old man frustrated that he can't make the magical book work. It's take someone younger - someone for whom the walls between this world and the next are a little thinner. They catch a whiff of fresh bread, and are transported to the world of Catherynne M. Valente's fable ""The Bread We Eat in Dreams,"" where a certain personable demon named Agnes will recount the story of her ejection from hell and the little hamlet that grew up around her."

Being a miner is like playing Russian roulette every day of your life. Any morning you might wake up, and find the chamber with the bullet. Tommy - the youngest in a long proud line of West Virginia coal miners - finds out what it feels like to have your card be up when an explosion traps him and a dozen other souls two miles beneath the earth. With oxygen growing thin, their only prayer might come from an old ghost story.

"""Sleep is dying, and has been for a long time now, through uncounted ticks of clocks and the flickers of thousands of too-brief candles."" It's the night of the Senior Prom, and rather than show up awkwardly, Cassie has decided to stay home with the Dark Tome. But, she soon meets a mysterious stranger with an invitation to a masquerade ball wicked and mysterious, far stranger than any rites of spring. What she learns there will reshape her thoughts on dance, if she can ever make it back. Be dazzled in this adaptation of Kat Howard's short story ""Murdered Sleep,"" which originally appeared in Apex Magazine."

"Quick witted but unlucky in love, Jana is dragged by her friend Erin to attend an 'eye gazing party,' a new age phenomenon run by a couple of hucksters on the far edge of a small Texas town. Jana's skepticism turns to confusion when Erin - and all the girls at the party - are entranced by an unremarkable man ""Thirteen."" As part of ""Dark Duets,"" mojo storyteller Joe R Lansdale paired up with his daughter, Kasey Lansdale, to pen this tale of a monster whose power is through the eyes. Featuring a special performance and selections of music by Kasey Lansdale."

"Cassie returns home after the wondrous night at the prom and instead finds her dreams shattered. She splits, and seeks refuge in Mr. Gussy's bookshop... and the Dark Tome. This time, the book calls out for her. She finds herself outside a foggy farmhouse alongside an estranged son returning home. But the homecoming is replete with family secrets, and the demons the father sought to hide will make themselves known."

"Cassie returns from her traumatic trip to a haunted - and haunting - family reunion. As she attempts to re-align her world, Gussy stumbles out of his and into the world of Jonathan Maberry's INK. Gerald 'Monk' Addison is a skip-tracer and P.I. on Boundary Street, down the hill from where the good people go. He’s on the side of the angels, but he’s not very nice. Most of Monk’s clients are bail bondsmen and bad lawyers, but every now and then he takes a special case. He’s hired by the ghost of a murder victim to solve their untimely death and exact justice. But hiring Monk comes with a price, even for the dead."

"Young Lettie can see things through her magic eye - things that might be better if she not see. Grownup's secrets. Grownup's true intentions. But when she learns of her brother's unjust arrest and sham trial, it's her seeing eye - and some conjure magic from her Mama - that may help change the fate of her big brother. We experience the flip side of folk magic in ""Trial Day,"" by Tananarive Due."

Dark Tome E10 - How Gussy Got the Book

Gussy and Cassie learned they've "Gone sideways" - the Dark Tome has returned them to the world, but not *their* world. As Cassie struggles to understand the predicament the book has put her in, Gussy recounts the heartbreaking tale of how he got his hands on the Dark Tome, and the cost the book has caused him.

"""Everybody whose grown up in Faulkesville, well, they’ve always guessed there’s something wrong with the woods on the edge of town, the ones that border Willowhill, something people don’t like to bring up in polite company."" Teenage Samantha keeps her nose in her books and her head in the clouds - in lands far beyond the borders of the small town of Faulkesville where she's grown up. It's not just boredom Samantha's escaping - Willowhill is where her parents mysteriously died two years ago, and where her Uncle Ted and buddy Hank Jedsoe are about to discover the real horrors that lurk in the haunted woods."

"""I'm not a ghost!"" -- ""All ghosts say that."" Cassie is flung to a world where body modifications are routine and one daughter of a Chinese immigrant is prepared to make an unbelievable sacrifice to save her own skin. This is the world of Alyssa Wong's NATURAL SKIN, a harrowing tale of distorted ideas of beauty in a near-future dystopian Toronto, Canada."

"Cassie's saved by a friend, but learns that her world has changed more than she could have imagined while she's been gone. Worlds gone wrong turns out to be a theme, when she goes on her next trip, to the world of THE BACCHAE, by Elizabeth Hand. In a world where environmental destruction has poisoned life to a breaking point, what consequence will fall on those who were implicit in its demise?"

"Kim and Cassie hide away at a rich family's home in a neighborhood on the outskirts of town. But, Kim isn't letting Cassie go without learning some of her secrets… And what Cassie reveals, may be as much as Kim can handle. In the world of BIRDS OF AZALEA STREET, by Nova Ren Suma, a monster lurks behind closed doors... A monster tolerated by the sweet neighbors, who will turn a blind eye to monstrosity if it'll help keep property values in check."

"Cassie's transported to a Caribbean island in the near-future, where a devastating 'duppy tide' caused utter devastation… And has led to a new, perverse form of tourism. But the tourists are in for more than they bargained for when they learned of the mutated fauna in this home that gave birth to zombis. Buckle in for a tour of the underwater Caribbean in ""Inselberh,"" by Nalo Hopkinson."

Cassie returns to her high school guidance teacher's office, looking for answers. Mr. Carter tells his story, about how he first encountered the Dark Tome, and the terrible effects it had on his life. Now, Cassie faces a choice of grace consequence.